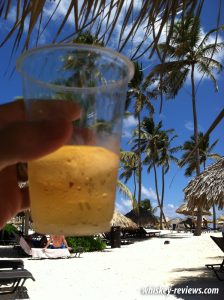 About a month ago, my wife and I celebrated our first anniversary by recreating our honeymoon and flying back down to the Dominican Republic for round two.  We stayed at an all-inclusive and were (once again) quickly swept up by the Caribbean culture of rum – and lots of it.

Being immersed in a culture with such a strong identity behind a specific spirit is interesting to me as an American.  In Punta Cana, you simply cannot go anywhere without seeing an advertisement for either of the major players in the rum game; Barceló and Brugal.  When you’re in a bar down there, they certainly cater to Americans with vodkas, gins, wine, and beer.  But they much prefer to hand out rum (and maybe some Mama Juana, if the mood feels right).

What I find so fascinating about this is the national unity behind that spirit.  As an American, there is not a specific spirit that we stand behind as a group.  As an optimist I’d love to say that bourbon is our drink, but as a realist I know and understand that other spirits such as vodka reign supreme when looking at sheer volume of consumption.

What do you think?  If you’re American, do you agree with me or do you think that there is a spirit that unifies us?  If you’re not American, is there a perception that I am missing?  Let me know in the comments.