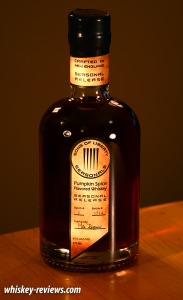 We’ve nearly reached the end of 2014, and another 25 (26 if you count this one) whiskeys have been reviewed, the most recent being Sons of Liberty Hop Flavored Whiskey.  While pumpkin flavored goodies are typically reserved for and enjoyed during the Fall season, I find myself behind on my reviews.  Therefore, we will briefly revisit Autumn, and try another one from Rhode Island’s craft distillery – Sons of Liberty Pumpkin Spice Flavored Whiskey.

Their website explains further: “This release captures the essence of autumn in New England with locally grown pumpkins and traditional autumn spices.  The Sons of Liberty and many volunteers cut, core, roast and press 32,000 lbs of pumpkins for a genuine pumpkin flavor.”

On the palate, it tastes very much like a Christmas candle smells (not an entirely positive characteristic).  This seems more like a liqueur than a whiskey.  It’s very smooth which could be dangerous if you’re not careful.

Sons of Liberty Pumpkin Spice Flavored Whiskey earns a respectable rating of 79 out of 100.