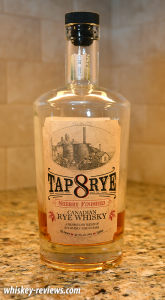 One of many hot button topics currently being debated in the whiskey world is sourcing.  Cruise over to the Bourbon Truth blog, and you’ll see that transparency is something many “distillers” (putting that word in quotation marks for good reason) don’t care to honor, while many novices and connoisseurs alike are craving it.

And it’s not always easy to tell when you’re on the consumer side of things.  Many brands claim a long and historic heritage in whiskey, which can take a little detective work to find out if it’s legitimate, or just the tall tale of a marketing agency.

The reason I begin this particular review with this preface is that Tap Whisky gets it about half right (or half wrong, depending on who you ask).  I was told on Twitter that they are sourced, so I decided to check their website, which is linked above.  Under their “Our Story” page, they write the following:

“It all started with TAP Canadian Maple Rye Whisky, produced in small batches in the oldest distillery in Western Canada. A marriage of two purely Canadian flavors – rye and maple, are produced in the province of Quebec, where syrup tapping was born and perfected centuries ago.  We’ve extended our line to include limited edition Rye Whisky blends, each run unique in flavor and aged in hand-selected barrels – get them while they last.”

The distillery in Western Canada they are referencing is likely Alberta Distillers Limited, where many Canadian rye whiskies are sourced.  The fact that they mention a distillery, but fail to say it whether or not it is owned or operated by them, is fine for some I’m sure; but I find it a little misleading.  They also go on to say in their FAQs that their whisky is blended by Master Blender Michel Marcil.  This is another half-step in a favorable direction, but they still never fully own-up to the fact that they aren’t distilling.

Perhaps I’m reading too much into this, or maybe I’ve just read too many other blog posts about the same topic.  Regardless of where its origins lie, let’s see what Tap 8 Rye tastes like.

The nose starts out with the typical lightness of a Canadian whisky.  Tap 8 Rye transitions to walnuts, cigar smoke, and some subtle sherry.

The taste is grainy and simple, with a little bit of burn.  Tap 8 Rye exhibits faint caramel sweetness, with more understated sherry.  Despite eight years spent in the barrel, this whisky has a youthful edge.  Perhaps it’s the barrel choice, or this particular whisky simply needs additional time to rest.

There’s more burn on the finish, while sweet and nutty notes also emerge.

One of the fundamental things you give up when you source is control of the complexity (or lack thereof) of the new make.  Tap 8 Rye is not really an impressive whisky for the price or marketing, but fits the profile of a sourced, sherried Canadian whisky.