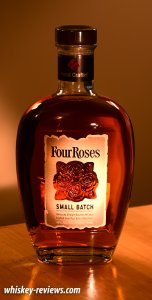 Some brands in the whiskey world have a very loyal following.  Sometimes it has to do with their extravagant marketing, sometimes it’s the lore around their distillery, and sometimes it’s just the quality of their juice.

I don’t personally have that brand loyalty toward Four Roses, but plenty of other people do.  It’s apparent on social media when you see the pictures and blog posts around this brand.  Their marketing is relatively low-key and there isn’t a wild story about the history of their distillery, so it must be the whiskey itself.  After a long hiatus from drinking Four Roses, I decided to buy a bottle of the Small Batch and put it to the test.

On the nose, there’s maple syrup and charred oak.  Four Roses Small Batch has a heavy rye spice, with alcohol burn and some zesty citrus.

The taste begins with sweet vanilla and corn.  Again, Four Roses Small Batch is peppery from the high rye content on the mash bill.  It’s pleasantly smooth yet flavorful at 45%.  It’s a pretty straightforward bourbon; not terribly complex.

This whiskey has a nice long finish with sweet oak and rye.

Four Roses Small Batch is a simple bourbon, earning a rating of 83 out of 100.

There’s nothing overly exciting or interesting about this bourbon, but that doesn’t make it bad.  Four Roses Small Batch does its job as an average quality/average price bourbon for those looking for consistency in a bourbon that doesn’t make you think too much.