A Thirst for Knowledge 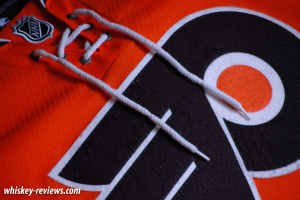 Back in January, I wrote a post called “Learning About Whiskey” which concisely explained how little I really know about whiskey.  As I continue to write for this blog, I find more and more things about whiskey, and life in general, that I just plain don’t understand, yet I have the constant desire to learn more about.

For instance, my wife and I are die-hard Philadelphia Flyers fans (hence the picture to the right).  We’ve watched nearly every game for the past five years or so.  We usually make it to a couple of games a season, stock up on the essential gear and apparel, and even support some of the Flyers preferred charities.  Despite our dedication, we missed forty or so Flyers seasons previous to our allegiance, and therefore are humbled by the more tenured fans.  I could likely hold a conversation with any hockey fan about the last half-decade, but anything past that and I’m stumped.

To me, this has a direct correlation to my love affair with whiskey, only I’d venture to say that I know less about whiskey and have even greater a desire to learn more.  Every time I try a new whiskey, I feel like I’ve opened a door to whole new set of variables to dissect.  Even re-discovering old whiskeys has its thrills – I recently bought a bottle of Powers Gold Label (something I had had before), and quickly discovered its pot still influence, something I had not realized previously.  Although very minor, that discovery got me thinking about other small characteristics I had been missing when sampling whiskeys for the past several years.  This yearning for more and more can be overwhelming, especially when knowledge like this seems to come easy to other people.

I think that this desire is not unique to me, and is simply a part of life.  Even in my professional life, I strive to meet goals in my job that are not always realistic to my experience level.  I want to progress as quickly as I can despite my relatively short time in my particular field.  Ambition is a positive trait to possess, but it can sometimes handcuff you if you don’t keep it in check.

I was tipped off via the Value Whisky Reviews blog about a post by Jason Debly of Jason’s Scotch Whisky Reviews.  It discusses the “Slow-Whisky Movement” in which whiskey can be enjoyed in very small doses.  Its technique brings the reader back to the basics of whiskey drinking, away from the inner-competition of trying every whiskey possible.  Although I can’t say I will commit to Jason’s five tenets, I think it’s a great way to ensure that you aren’t over-doing it with whiskey.