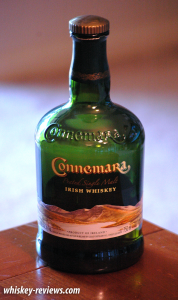 I first had Connemara maybe three years ago.  Without studying the label carefully (this was before whiskey was such a passion for me), I assumed it was a Scotch based on its peaty aroma and flavor.  Looking back, it seems foolish, but then again, Connemara is a very radical expression coming from the Emerald Isle.  Most Irish whiskeys are triple-distilled with no presence of peat, while this one is double-distilled with a distinct peat character.

I’ve said it here before and I’ll say it again – variety is what makes whiskey so interesting.  Certainly the people behind Connemara share that philosophy with me.

You guessed it – the nose has a fair amount of peat.  In addition, there is some smoke as well as a medicinal quality (almost like Vick’s).  Connemara’s nose is also slightly creamy.

It’s a little bit bigger on the finish with a good deal of smoke.  The peat will stay with you, which is one positive to take out of this whiskey.

If you couldn’t tell by the tasting notes, I’m not quite as keen on Connemara as some of my fellow bloggers are.  It earns a rating of 82 out of 100.

This whiskey is over-hyped in my opinion, perhaps gaining popularity from the novelty of a peated Irish.  It’s certainly a nice change from some of the monotonous expressions from the Ireland, but leave peat to Islay!