A Lesson in Irish Whiskey 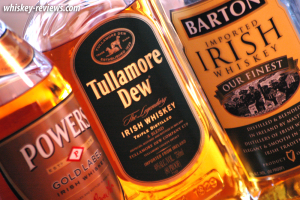 Ah yes, the redheaded stepchild of whiskey – Irish.  And that descriptor actually works; Ireland is full of redheads!

In all seriousness, many whiskey enthusiasts view the Irish variety as boring, laughable, and sometimes even a step backwards in whiskey evolution.  But why?  Let’s dig a little deeper into our beloved drink hailing from the Emerald Isle.

Before we get started, you should know that distilling in Ireland has changed dramatically in the past one-hundred years.  Once a land booming with distilleries, it is currently down to three – Bushmills, Cooley, and Midleton.  These three distilleries produce 100% of the whiskey claiming Ireland as its heritage, which to me shows that innovation and taking risks is trumped by tradition and the necessity for staying in business (survival).

The main difference between Irish whiskey and Scotch are the styles produced.  Many blends of Scotch are sent to market (in fact, 90% of Scotch is blended), but the more revered brands are single malt.  On the contrary, many of Ireland’s most popular brands, including Jameson, Powers, Paddy, and Kilbeggan, are blends.  There are some single malts, but they are few and far between.  A unique style of Irish whiskey is pure pot still, found only in the Redbreast and Green Spot brands.

Irish whiskey can also be separated from Scotch in that it is typically triple-distilled.  Although we typically associate multiple distillations with other high-quality spirits (vodka, etc.), to some people this can have a negative effect on whiskey.  This extra distillation or two can purify the whiskey a little too much, removing some of the flavors brought on prior to aging.  Depending on what side of the argument you are on, this can create either “pure” or “impure” whiskey.

So maybe (just maybe) you’re here to get my opinion on the topic.  What do I think of Irish whiskey?  To be honest, I’m with the skeptics for the most part.  In the handful of years that I have been purchasing whiskey, I have only bought two bottles, and those were for St. Patrick’s Day.  I just don’t get the same satisfaction out of Irish that I do out of Scotch or bourbon.  From my experience, Irish whiskey is just too light and one-dimensional, which is fine in small amounts, just not worth my money when there are better choices out there.  I’ll order a Jameson at the bar, but it’s usually when I had a big dinner and I don’t want my drink weighing me down.

What do you think of Irish whiskey?  Do you find it enjoyable or do you stay away from it completely?  Let me know in the comments.