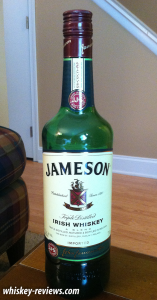 Step into virtually any bar in the world, and you’ll likely see a bottle of Jameson on the shelf (and likely more in the back).

This is by far the most popular Irish whiskey worldwide.  Does that mean that it’s the best Irish whiskey available worldwide?  I wouldn’t go that far.  But it’s certainly one of the easiest to drink for people whose taste buds aren’t necessarily adapted to whiskey.  And it lends itself to cocktails by mixing with anything from soda to a pint of Guinness.

But will Jameson hold up against the other Irish whiskeys I have reviewed thus far?  Let’s find out.

Jameson starts out with a classic pot still Irish nose.  The nose is very light and grainy (not necessarily a good thing).  Jameson is heavier on alcohol than it is pleasant aromas.

This whiskey has a “paper taste” according to my dad, and I don’t disagree.  It’s light and sweet, and not much more that that.  Grain is the star of the Jameson show, contrary to what the back of the bottle will tell you.  I really don’t detect much malt or oak.

There’s not much flavor on the finish, although what do you expect for a triple-distilled whiskey?

Jameson Irish Whiskey is a staple for bars around the world, but earns a somewhat average rating of 76 out of 100.

If you’re serious about Irish whiskey, do yourself a favor and buy Powers or Connemara.  If you still want to give Jameson a chance (and don’t mind spending an arm and a leg), try the 18 Year Old.