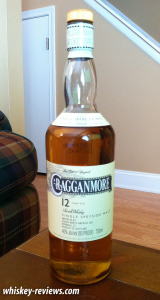 I’ve reviewed a lot of whiskeys on this blog.  Ninety to be exact.  Most of them are whiskeys I saw in the store that I had heard something good about.  And maybe not even good; just something.  Others I was drawn in by the label, the bottle, its proof, or sometimes just its geographic origin.

Cragganmore 12 Year Old doesn’t fit any of that criteria.  Its label isn’t that exciting and neither is the bottle.  It drinks at an 80 proof which usually isn’t that enticing for me.  And it is a Speyside, which is great, but nothing exotic.

In other words, I never had a good reason to try Cragganmore, until I started running out of whiskies to try that are available in my state.  I suppose that’s as good a reason as any to pick up a bottle and write a review.

Cragganmore 12 Year Old has a classic Speyside nose, with plenty of nutmeg and other spices.  This seems a little similar to Amrut, only not as intense.  A higher proof may bring out a little more on the nose.

The taste is spicy and malty.  Cragganmore is not as thin as I expected at 80 proof, but certainly not at my ideal strength.  There’s a little smoke on the back end to add a little interest to this whisky.

This one has a tasty, malty finish, although not all that long lasting.

Cragganmore 12 Year Old is an okay whisky, earning a respectable rating of 81 out of 100.

This isn’t a bad whisky by any means, but I’m not convinced it’s worth the price.