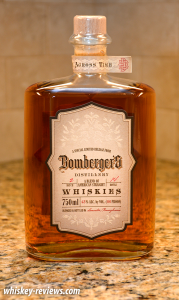 The story of Bomberger’s is an interesting one.  I first heard of this whiskey on Twitter, and realized it was being bottled (not distilled) at Thistle Finch Distillery in Lancaster, Pennsylvania – not far from where I live.  My wife and I made the trip to the distillery and purchased a bottle.

Time passed before I would open the bottle, and the battle for the Bomberger’s name/brand began.  I won’t get into the details here; you can simply Google for “Bomberger’s” and read all about it.  What I can say is that the old website I had originally linked on this post as a draft no longer exists, which tells me that we likely won’t be seeing more bottles of this stuff (at least with the label pictured and the whiskey I describe) going forward.

Similar to Jameson, Bomberger’s starts out with the scent of paper (and maybe a touch of ink).  It takes a while to open up and reveal a blend of bourbon and rye aromas.  Dark cherries and chocolate finally come into play.  Bomberger’s smells sugary sweet with a little bit of spicy rye influence.

There’s more pine and peppery notes on the palate than what could be detected on the nose.  Bomberger’s offers citrus flavors with corn syrup and lightly charred oak.  This whiskey tastes young (and it is), but not terrible.  The taste grows on you as you sip.

This is a sourced whiskey that doesn’t seem to have its own unique identity.  The juice isn’t bad, but it needs more time in the barrel or something different in the mix to make it really special.  We likely won’t get to experience a more mature or different Bomberger’s because of the dispute, and that’s a shame.