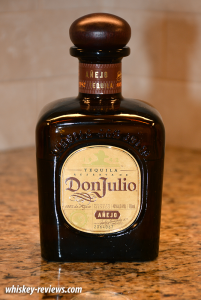 I have reviewed two rums on this blog (Brugal 1888 and Ron Zacapa).  As I reviewed these “premium” rums, it sparked an interest in learning about spirits other than whiskey.  I’m not particularly interested in vodka, gin, or brandy.  I do enjoy beer and wine (not that they count as “spirits”), but there’s just too much variety to venture down that road.  The next logical place to go is tequila.

When I was 16 years old, my dad worked for a company that operated a tequila distillery near Guadalajara, Mexico.  I happened to have taken three or four years of Spanish classes, but was not fluent (conversational would be a stretch).  Nevertheless, my dad talked his company into bringing me along for a business trip to the distillery as a translator.  While the trip was memorable, I’m not entirely sure I helped translate anything of value to either party…

Don Julio Añejo’s nose starts with blue agave mellowed by cherries and oak.  It’s not as intense as a Reposado or Blanco (by design).  This spirit is salty with a hint of sweet pine needles and cereal.  There are subtle, fresh citric notes, as well.

The first sip of Don Julio Añejo will make you…thirsty.  This, like many other tequilas, has a salty quality to it, that I would not describe as “thirst-quenching”.  After drinking lots of whiskeys north of 40%, this tequila is easy drinking.  The oak imparts more sweetness on the palate than the nose.

This tequila finishes with sea salt and a touch of sweet, blue agave.  I also pick up cigar box/wrapper.

This is a tasty añejo – one of my go-tos when I’m in the mood for something different than the usual.  I recognize that I am comparing apples to oranges, but tequila just doesn’t seem to match the complexity and character of whiskey (generally speaking).  Therefore by comparison, I just can’t justify rating this higher.