I was approached via email by a whiskey enthusiast from Texas named JD regarding degradation, something I have blogged about and often pondered while looking at the bottles gathering dust on my shelf.  With his permission, I have posted his notes below.  I hope you find them as interesting as I have.

In a quarter of the whiskey blogs I read, they make reference to a spirit losing or not losing “something” with time.  A lot of these blogs do not have a dedicated post to the topic, but rather allude to their beliefs from time to time.

I am interested in this subject because I have countless friends who are fearful of “degradation”, so they only have one open bottle at a time; finish it off completely, then get another.  I think this really limits the learning experience that comes from doing side-by-side comparisons.

As a chemical engineer, I have my educated views on the matter, but I haven’t an expert-tuned palate or the desire to set aside resources and set-up an experiment to prove my theory.  So, I would love to share these thoughts with fellow whiskey drinkers to get their opinions.

I’m an engineer at heart (and degree, vocation), so we need an Excel-generated plot, right?  Right.

As you can see, compared to the “last glass,” the amount of bottle breathing that occurs by the time half the bottle is consumed is about 1/10th the amount of breathing experienced by the last glass.  Even the second to last glass is about half as breathed as the very last glass!

So to wrap your head around this plot, think of taking the very first 1.5 oz. out of a bottle and pouring it into a clean 1.75 L bottle (approximately 59 fl oz.; also the volume for most orange juice cartons, but if you have any respect please don’t use that).  57.5 fl oz. of air space remaining, the ratio is 57.5 / 1.5 = 38.  So if you left that dram in the 1.75 L bottle for a couple of hours and then poured it into your tasting glass, this would be very similar to the amount of “bottle breathing” or “cumulative air/liquid ratio” eventually experienced by the last glass from a 750 ml bottle.

The first thing I noticed on this topic was what I call “the last glass”.  This has been noticeable to me with most of the whiskey bottles I go through – the last glass I pour is mellower than I remember the majority of my experiences being from that bottle.  I hadn’t noticed it in all cases, probably because I wasn’t keen on the subject.  Some whiskeys undoubtedly have more highly volatile compounds responsible for their signature flavor notes than other whiskeys.

Breathing whisky in a tasting glass

Now, if I pour a glass of whiskey (even when the bottle is full) and smell it for the first 30 seconds after I pour it, and then come back ten minutes later, I’ll usually notice a change in nose notes and, to a lesser extent, mellowness in taste when drinking.  Peat aroma is one of the ones I find to change dramatically over time (from rubbery to smoky).  Also, with almost every glass, even if I couldn’t smell apples for the first ten minutes, I usually smell apples if I let it set for a long time.  That must be one of those longer lasting aroma compounds.

Essentially, I think pouring a glass from a full bottle and then letting it breath for a few minutes is probably akin to pouring the last glassful from a bottle and drinking it more quickly since it has been “breathing” in the bottle.

Here’s what I think matters and why I plotted what I did:

1) The ratio of gas space to liquid space is important.  For example, if you put 1 oz. spirit in an 11 oz. bottle (10 fl oz. of air space), it would be more “depleted” or “breathed” than 15 oz. spirit in a 25 oz. bottle (also 10 fl oz. of air space).  The air space is the same in both cases, but with the case of 15 oz. liquid, so much more liquid is available to deplete in the filling of the air space with vapors.

2) Cumulative exposure – each time the bottle is opened and closed, the liquid “breathes” a little more.  And so the liquid that composes the last oz. left in the bottle was already partially depleted from every prior opening of the bottle.

Note: this is not a scientifically precise answer, but rather a guideline.  Some compounds are naturally going to become depleted from breathing more quickly or slowly. 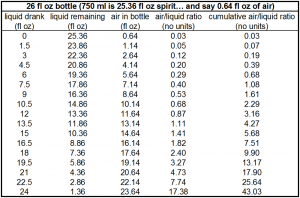 Whiskey has a lot of different trace compounds in it (and these are admittedly responsible for the lion-share of what you taste).  When placed in a bottle, let’s say half full and then a cork is placed on it, each of those compounds will evaporate slightly until there’s a certain amount of each compound in the vapor phase.  But, just because a certain compound makes up 0.01% of the liquid phase, this doesn’t mean it will only make up 0.01% of what evaporates.  It may have a strong affinity for the vapor phase and have a much larger share of such.

I’m not primarily talking about ethanol.  There’s too much ethanol to be significantly changed by the little evaporation that occurs in the bottle.

What does matter is trace compounds (fractions of a mL in an entire bottle), and some of which have a slightly stronger affinity for the vapor phase.  Some of these could be almost completely vented by the time you get to the very last glass from the bottle.

I’m just going to make an overarching and slightly more educated guess that basically all true chemical reactions are going to happen in the still.  Whatever compounds result from high heat and pressure in the presence of a copper catalyst are basically as stable as they come.  So without further rambling, I’m going to assume no further genuine chemical reactions occur.

I am not so much talking about ethanol and water, but more so the trace compounds responsible for a lot of the flavor, some of which are very prone to evaporate.

Since bottle breathing is dependent on how much vapors you let out and not dependent on time, it doesn’t matter if you consume a bottle in 15 days or 15 years.  If you open the bottle and replace the gaseous phase 15 times, that’s what matters

Bottom line – only the last 1-to-3 drinks are substantially effected, and really most of that is the very last drink.  So when you’re down to you last 3 oz., just pour yourself a double.

Big thanks to JD from Texas for allowing me to post his thoughts.  Cheers!