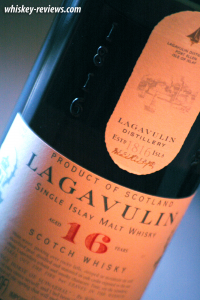 My good friend Ryan at the now out of commission Value Whisky Reviews started an idea that examines a concept that whiskey drinkers have wondered about for a long time.  He wanted to determine how much the air in your bottle of opened whiskey changes the contents over time.  He called these his “Open-Bottle Shelf-Life Experiments“.  From Ryan, I have acquired an opened bottle of Lagavulin 16 Year Old Scotch and several small sample containers with whisky from the same bottle.  The idea is that the large bottle has more air interacting with the whisky and the small containers have as little air as possible to interact and manipulate the contents, thus retaining the aromas and tastes of the original whisky.

Whisky A is decidedly more full-bodied than Whisky B.  It has the chocolate orange that Ryan had previously mentioned in his review.  I also totally “get” the band-aid peat references he made.  In comparison, Whisky B has a much weaker aroma, with almost an unpleasant smell.  It doesn’t seem to have lost its kick as far as alcohol content in the nose, but it has certainly lost its allure.  To be completely honest, Whisky B has a similar quality in the nose to a cheap, watered down bourbon like Virginia Gentlemen.

Whisky A is quite mouth-watering to any serious whisky fan, whereas Whisky B smells like a run-of-the-mill Scotch with not much else to it.

In the mouth, Whisky A tastes pretty watered down, but good flavor overall.  There’s a nice amount of peat and it tastes well-balanced.  Whisky B is actually pretty similar in taste, which is a positive!  Perhaps the nose is what is affected and not the taste – maybe there’s hope!  There’s a little more smoke in Whisky A, but that’s about it.

The finish for both Whisky A and Whisky B is pretty long due to the peat influence.  They both hold up pretty well and are very similar.  The only difference is that Whisky A carries more peat in the finish and Whisky B carries more generic maritime Scotch flavor.

This whisky certainly changed over time, which was very noticeable from the second I compared the nose of the two of these side-by-side.  However, I fully expected the difference to be much more extreme, and I have to say that I am pleasantly surprised, largely because bottles of whiskey can spend a gratuitous amount of time on my shelf before they are finished.

I give my friend Ryan a lot of credit for starting these experiments and digging deeper into whiskey and the way we perceive and interact with it.  I have certainly learned a lot and will continue to be inquisitive when it comes to my whiskey and the way it changes over time.