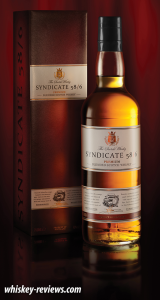 There are plenty of tall tales being spread around the whisky industry, both state-side and overseas.  For some reason, rather than letting the whisky speak for its quality by taste, many distillers resort to including a story with every bottle.

I received a sample of Syndicate 58/6 Blended Scotch and didn’t bother to research it before sampling (something I do intentionally).  After quickly realizing this was significantly better than your average blend, I of course Googled the whisky to find out more.  According to the website, the story goes as follows:

“In 1958 a rare blend of Scotch Malt and Grain Whiskies was discovered in 10 oak casks in Leith, Edinburgh in a warehouse owned by William Muir.  After some research it was discovered that the blend had been originally distilled in 1954 and that the blend recipe…dated back to the 1800s.  In 1966 a small quantity of the blend, which was now 12 Years Old, was bottled for the private use of the Directors of William Muir (Bond 9) Limited and a number of their friends.  A total of six individuals were instrumental in forming what became known as Syndicate 58/6 – hence the name.”

Gimmicky story?  Check.  Furthermore, the blend has its own story:

“The Syndicate blend contains 18 Single Malt Whiskies and 4 Single Grain Whiskies.  The quality and consistency of the blend has been maintained over the years by operating a ‘Solera’ system whereby when additional 12 year Old whiskies are added they are reblended with the older stock.  Thus the Syndicate blend still contains small quantities of the original 1958 blend.  One of the things that sets the Syndicate blend apart from other blends is that it is ‘married’ and finally matured for up to 2 years in 4 year old Oloroso Sherry casks which we import from the Spanish region of Andalucia.”

So how does the whisky actual taste, given this impressive background?  Let’s give it a whirl.

The nose on Syndicate 58/6 is immediately reminiscent of Macallan 12 Year Old.  There’s lots of mature oak and malty leather.  I detect no trace of grains being blended in.  There’s also cinnamon and pepper, adding some complexity.  There’s very little alcohol on the nose of Syndicate 58/6.  Breathing this whisky in is pleasurable enough.

When you finally do take a sip, this one is again similar to Macallan’s flagship whisky.  I wouldn’t say Syndicate 58/6 is “sherry-finished”, but rather “sherry-matured”.  There’s deep, deep oak; it’s very smooth, enjoyable, and complex.  I also get vanilla, caramel, and figs.  I’m surprisingly okay with the average proof on this whisky,

The malty finish is very pleasant.  This is unlike most other blends, including the Compass Box portfolio, and I am obviously a fan of their range.  This is a whisky that coats your glass which makes nosing after a sip that much more enjoyable.

Could a whisky with a story this gimmicky actual be this good?  This is certainly one of the best blends I have had the pleasure of tasting.  I can’t say it’s worth the price, but this is definitely a complex, quality dram to be enjoyed.