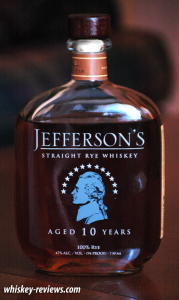 First impressions can be haunting, even with whiskey.  I had my first interaction with the Jefferson’s brand way back at Whiskey Fest 2011.  I walked up to their booth and asked to try their bourbon.  The gentleman working there looked me up and down, poured a few “precious” drops of his bourbon in my glass and gave me the impression that he didn’t want to waste time on my demographic.  I said something along the lines of “I’ve never heard of your bourbon” and he laughed a little and turned to the other side.  I tasted the bourbon, and really didn’t care for it.  I suppose it was partly his behavior and partly the sub-par bourbon itself.

Flash forward a year or so, and I have the opportunity to try Jefferson’s Rye.  I had my reservations as I typically prefer bourbons over ryes, so I had low hopes for this one.  Shockingly, this was one of the better ryes I have ever tasted.  But, I’ll tell you more about why in the notes below.

Now here’s a great nose!  Jefferson’s Rye has loads of oak, and of course, rye (this is 100% rye, after all).  It’s very woody and the lengthy aging is very apparent.

The taste is rye, perfected.  Unlike many rye-heavy bourbons, which I won’t bother naming here, this is not bitter in the least bit.  You can really taste the care and craftsmanship in the wood chosen and the time spent in the barrel.  Cherries make a strong appearance at the tail-end of this whiskey.

Jefferson’s Rye has a delicious finish that is long-lasting with glimpses back at the aforementioned flavors.

This is my second favorite rye, just behind Sazerac 18 Year Old.  What a tremendous value!