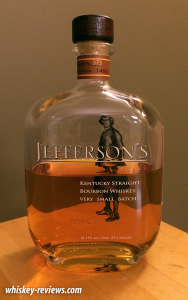 A little more than a year ago, I reviewed Jefferson’s 10 Year Old Rye.  In the “Background” section, I mentioned my first experience with this brand, in which I was unimpressed with their trade show representation, and their bourbon.  Because I really enjoy their rye, I thought I would give their bourbon another shot, as admittedly, I may have been biased during my first tasting.  Below are my unbiased findings.

The nose on Jefferson’s Bourbon starts with toasted oak.  Soon, it becomes slightly nutty, with corn and rye.  It’s a little spicy (peppery) and bitter, but pretty mellow overall.

Candy-like sweetness on the tip of the tongue gets the taste of Jefferson’s Bourbon started.  Next, there’s corn and oak, with an overall light mouthfeel.  I would really prefer a higher proof on this whiskey, as I have a difficult time picking out anything else too interesting.

There’s a touch of caramel on a relatively brief, bitter finish.

As stated before, a little bit higher of a proof may have saved this otherwise uninteresting whiskey.