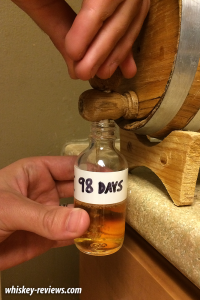 After taking a brief hiatus from my experiment in order to allow my whiskey to mature without interruption, I am back at it, and trying another sample.  Today is Day 98, and the spirit in my barrel hasn’t been touched since April 12th.  Let’s get into it.

This whiskey is certainly developing in its color as it has rested in the barrel.  I suppose more than three months exposed to charred oak will do that.  However, it’s still not as dark as many of the ryes that have sat on my shelf, which is my first indicator that this is still relatively “young”.

On the nose, this whiskey is still very much in its development stage.  It’s young, but continues to pick up smoky characteristics from the wood.

The taste on this whisky is really starting to get good.  The malted rye is beginning to make a defined appearance, along with woody, earthy smoke.  It’s exciting to literally taste the progress this is making.

I am still enjoying this experiment, but recognize that significantly more 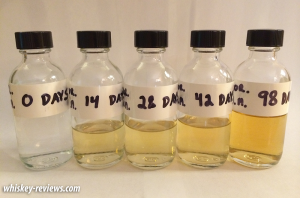 Edit: final post on this experiment can be found here.