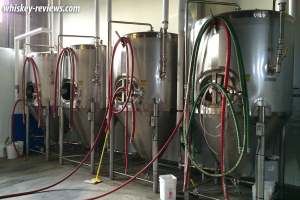 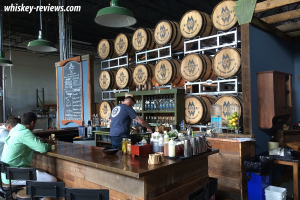 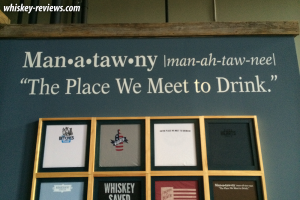 Yesterday was one of those unique Saturdays when my wife and I did not have a thing planned for the day.  We thought about driving into Philadelphia and going to a museum, but the thought of fighting city traffic was enough to deter me from that idea.

My wife brought up the idea to visit a local distillery – something I was immediately on-board with.  I reached for a somewhat recent copy of Whisky Advocate, and turned toward the back pages where they list local distilleries by state.  Only three were listed – Mountain Laurel Spirits (distillers of the infamous Dad’s Hat White Rye; they wouldn’t return my phone call or email inquiry, by the way), Philadelphia Distilling, and Wigle Whiskey.  My wife decided a quick Google search was in order, and Manatawny Still Works was first on the list, conveniently located right down the road in Pottstown, Pennsylvania.  She called the distillery, spoke to a friendly voice on the other line, and got us a spot on their 5:00 PM tour.

We arrived at the distillery a little early and were greeted by Randy McKinley and Jeff Vaughan.  Randy is the company’s VP of Sales & Marketing (in addition to wearing many other hats), and Jeff is the co-founder and one of Manatawny Still Works’ investors.  This was a friendly and inviting atmosphere – a place with an entrepreneurial spirit.

With admission for the tour, we were given a complimentary cocktail.  I asked the bartender to make me whatever he recommended using their white whiskey, which turned into a watermelon drink.  It wasn’t bad, but certainly not something I would order again.  Despite the fact that we would be sampling Manatawny’s portfolio neat later, my wife ordered their white whiskey neat.  We chatted a little bit more with Jeff about the history of the young distillery and then the tour began.

Randy led the tour and started by introducing himself and Jeff, along with a brief summary of the distillery’s personnel.  For day-to-day operations, Randy and head distiller Max Pfeffer run the show, along with a small team of bartenders.  As mentioned previously, Jeff is one of the co-founders, along with John Giannopoulos, co-founder of local craft brewery Sly Fox, which conveniently has a “tastin’ room” right across the street.

Randy further explained how the dream of distilling came to fruition in Pottstown, Pennsylvania, a town not known for much of anything, aside from its iron ore.  In fact, as legend has it, the iron ore from Pottstown was used to build both the Golden Gate Bridge and the Panama Canal, although I haven’t done my due diligence on either of those claims.  Regardless, this distillery which opened its doors in March of 2014 is a new sense of pride and identity in this small, suburban town.

After our brief history lesson, we walked toward the fermentation tanks and stills.  Randy explained that typical fermentation periods for spirits is around three days, yet Manatawny’s fermentation can last a dozen days or so.  They believe that a great deal of the character of the spirits is derived from this part of the process.  Next, we turned, and learned about their pot still and continuous stripping still, both sourced from Italy.  Randy told the group about heads, tails, and hearts, and how the unaged spirits are selected from a very narrow center of the stills’ cut.  The spirits going into barrels for maturation can come from a wider range.

Next on the tour were the barrels themselves.  Manatawny uses a #4 char for their barrels, as Max feels that this allows them to get the full aromas and flavor notes from the oak in the least amount of time.  Manatawny wants to produce well-matured spirits, but the investors of course want to start putting out product as soon as possible.  Randy told us that the whiskey being aged will be a two year old, but they may or may not have plans for longer-term expressions in the future.

Finally, we arrived at the end of the tour where we were able to taste the spirits.  We started out with Three Bitches Wheat Vodka, a spirit that Randy was very transparent about (pardon the pun).  They source this vodka from overseas where it is distilled six times.  Once they receive it, they distill it one more time before bottling.  He was very honest about this particular product not fitting their craft spirit portfolio, but that they have plans for a “craftier” vodka in the future.

Next up was T. Rutter Rum, an unaged raw sugar-distilled spirit.  This 40-proofer is meant to be a neutral rum for use in cocktails.  It was still tasty, and in my opinion, a step up from Bacardi’s white rum.

At last, we were able to taste their J. Potts Whiskey, a 94 proof white dog with a mash of wheat, oats, malted barley, and rye.  It was explained to me that they omit corn in their mash as they want to distance their product from the typical “moonshine” flavor profile.  I believe that they succeeded in doing so.

And here, the tour ended and the rest of the spectators wandered toward the bar and gift shop.  My wife and I stayed by the barrels and chatted a bit with Randy.  I revealed myself as a whiskey blogger, and he cringed a bit, although I assured him that I wasn’t there to write an exposé piece or anything of the sort.  We talked about the state of the industry, and where he sees Manatawny Still Works going in the future.  I like Randy – he’s passionate about his product and his company, without the slightest hint of arrogance.  I could sense a pride in this young distillery project, and for that reason I think these guys could stick around.

Randy invited me to wander around and take as many pictures as I want, as long as I didn’t trip on any hoses or break anything.  Because of his hospitality, I decided to buy a bottle of his J. Potts Whiskey, which I will be reviewing very soon, although I told him I would be honest in my review, and he should not expect a fluff piece.  I don’t think he would want it any other way.