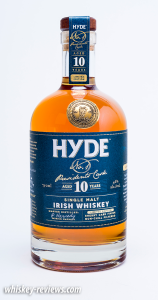 I have noticed a trend in whiskey.  Not unlike the craft brewing craze, distillers of whiskey have begun trying things that probably would have been frowned upon a few short years ago.  I see this same trend happening in Ireland, where the days of simple, grainy, double (or triple) pot-stilled whiskey are…well not over, but not the exclusive export.

Jameson recently launched its Caskmates Stout Edition, which I am hoping to review in the near future.  Teeling is finishing their flagship whiskey in rum casks.

The nose begins with really nice malty and cereal notes, followed closely by flowers and fruit.  Hyde 10 Year Old is unlike your average, grainy Irish whiskey.  There are also pears and nutmeg on this nose.

On the palate, Hyde 10 Year Old tastes much like a Highland single malt Scotch.  There’s leather and oak, as well as fruit and spice.  It’s sweet and oaky all in one.  The exotic spiciness puts this (to me) in a similar flavor realm to Amrut.

There is a nice, malty finish to this interesting Irish single malt.  More fruity notes appear toward the end to round this one out.

Is $80 a little steep for a 10 year old single malt?  Yes.  However, this is a surprisingly nice whiskey from the Emerald Isle, that is worth checking out.  The distillers in Ireland seem to be experimenting lately, and the consumer is being rewarded for them doing so.