Which Whiskey is Best? (Part 1)

Which Whiskey is Best? (Part 2) 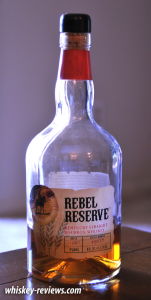 All whiskey reviewers (or reviewers in general) have their own personal preferences.  Some prefer peated Scotches, other prefer ryes, and some settle for the light taste of a Canadian.  I can say in all sincerity that my tastes run across the board, but there is something about a wheated bourbon that really speaks to me.

For those of you that missed my brief introduction, bourbon is whiskey produced from a fermented mash of not less than 51 percent corn.  The other 49 percent is often a mix of rye, malted barley, etc.  But sometimes a higher percentage of wheat is used to produce a different flavor profile.  Rebel Reserve is one of those whiskeys, using a recipe (and an accompanying label) to highlight its wheated properties.

Unfortunately, Rebel Reserve misses the mark when it comes to its nose.  It’s a little too intense on the alcohol side, most likely from its youthful age.  This makes it difficult to pinpoint its unique aromas and describe them to you here.

Fortunately, the flavor comes through on the first sip.  You can absolutely taste the wheat, which is exactly what I was hoping for.  But that’s about it.  Nothing too complex about this stuff, which I guess could be a welcomed change if you’re looking to relax rather than study the whiskey.

The finish is just about as underwhelming as the nose and taste.

Rebel Reserve is an okay wheated bourbon, earning itself a rating of 74 out of 100.

Go ahead and drink this one on the rocks while watching a movie or out on the porch.  No need to analyze this one.

Do yourself a favor and invest that same money (or maybe even less) into a bottle of Maker’s Mark.  Maker’s is another wheated bourbon with much more character and complexity, and should satisfy others like me who like their bourbons wheated.