The Power of Social Media 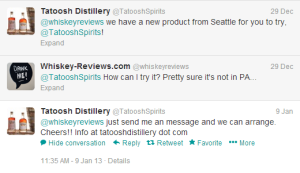 I find social media fascinating.  Now more than ever, conversations can be started in the simplest of ways and relationships can be strengthened with a few clicks of a mouse.  Networks like Facebook and Twitter make it easier than ever for the majority of people in the world to be accessible.

However, I’m also a skeptic.  For every one person making an honest effort to interact with actual human beings, there are ten people trying to take shortcuts and automate their marketing.  This is a bad move.

In case you didn’t know, I have a Twitter account for this blog that I’m pretty active on (shameless self-promo: I also have a Facebook page that needs a little love).  Once in a while, I get distilleries pitching their products to me, and I typically ignore them once I investigate and find out that they’re automating their marketing and attacking every other similar Twitter account to mine (type “whiskey” into Twitter’s search bar and see what you find).  There’s even a company that continually follows and unfollows me to try to get my attention – I don’t think so!

As you can see from the image above, I received a “mention” on December 29th from a distillery asking me to try their product.  For those of you new to the blog, I live in Pennsylvania, which means I’m very limited in the whiskey I get to sample.  I responded to the distillery and brushed it off, not receiving a response for over a week.  Just when I thought they were on to the next one, I received a reply.

I ended up communicating with Tatoosh Spirits through email with their co-founder, Troy.  He arranged for two small samples to be sent to me, and sure enough they arrived on February 1st.  I know many other bloggers receive samples from time-to-time, but this was unique for me considering I live in Pennsylvania and this was completely born through social media.  I have yet to try the Tatoosh Bourbon, but I am very excited to review and help Troy out.

Even more recently was the Maker’s Mark proof fiasco.  The iconic wheated bourbon brand announced that it would lower its proof from 90 to 84 to meet increasing demand.  After a severe backlash across virtually every social network, the company retracted its decision in order to keep loyal consumers happy.  In a statement on the Maker’s Mark website, the leaders of the company write “Since we announced our decision last week to reduce the alcohol content (ABV) of Maker’s Mark in response to supply constraints, we have heard many concerns and questions from our ambassadors and brand fans.  We’re humbled by your overwhelming response and passion for Maker’s Mark.  While we thought we were doing what’s right, this is your brand – and you told us in large numbers to change our decision.”

I think that proves the power of social media.